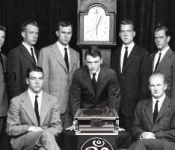 I’d like to introduce you all to Hallucinary in his first (though hopefully not last!) appearance on the Ranch.  An all-vinyl analog trip, clickyclicky to check out the wiggly waveforms within…

Kicking off with classic ’95-’96 Goa trance sounds and ramping up to full-on ’98 stompers by the half-way mark, Hallucinary brings it down a notch for the the second half with some techy trance, then picks things up again and rolls it back to 1995 by the end.

Description
Hallucinary: I started out mixing new-school (and still do) but once I got heavily into old-school, I found much new-school lacks the feel that I like. For me, old-school Goa has such an original sound that it didn’t take long before I became completely enveloped in it, and as I started collecting CDs I quickly found out that with the right CDs, you can create amazing variety.

Around May of this year, I started thinking about mixing vinyl; I wanted to go back to basics, really wanted to feel what it’s like to mix Goa using vinyl. To use tracks one can’t always get on CDs, I got out the Ion belt-drive decks I’ve had since 2004. Pitch control on these is not good, so a lot of the beat matching is done using my hands to control the speed of the track being mixed in. As I came to find out, vinyl is not cheap, and with vinyl this old you need the right needles and the right cleaners (got some pointers from Jim’ll Mixit who helped me alot – thanks Jim!!!).

Thanks for your submission, Hallucinary, and extra special thanks for being so patient. I’ve had this mix on my hard drive since around August, I believe…ouch.