Here you will find information about the resident DJs here at the Goat Ranch. Besides the guest DJ mixes that appear from time to time, our residents share their creations with us on a semi-regular basis. Usually more “semi” than “regular”, but you get the idea. 🙂

Hailing from the UK, Jim has been a long-time supporter and regular contributor here at Ranch. His mixing skills are exemplary, both in technical and artistic terms. With his ear for track flow and his technical skills yielding transitions I could only dream about as a vinyl DJ — not to mention the fact that he’s simply a damn fine human being — I was honored when he agreed to be the first resident DJ here at the Ranch.

In addition to the Goat Ranch, Jim is also a resident over at Psyberdelica, and you can also find him on Mixcloud and Soundcloud. 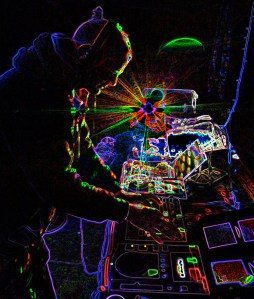 Here’s a little about Jim straight from the goat’s mouth:

Jim: Ha ha, ‘what’ is Jim? That question has arisen many a time. Who I am is just a regular old party head with a love for psychedelic.

Jim: No other music reaches the parts that psychedelic does. It was a natural progression towards it I guess. Parties here in the UK in the early 90’s confirmed my connection to trance.

Goat Ranch: What medium(s) do you use when you DJ? Vinyl, CD, laptop, stone tablets?

Jim: I learned to mix with vinyl. Stone tablets were far too heavy, and CD decks weren’t that readily available back then. My collection was a mixture of both mediums at the time but mostly vinyl. I eventually went digital and moved over to CD decks around 2002, and I continue to use them now, alongside my resurrected turntables.

Goat Ranch: If you were stranded on a desert island — equipped with a huge sound system powered by ancient alien technology, of course — which 5 records or CD’s would you want with you?

Jim: This is quite a difficult question in that I would probably wish to play all my music on this wondrous system. However, my immediate thoughts might be to want to test these great CDs: 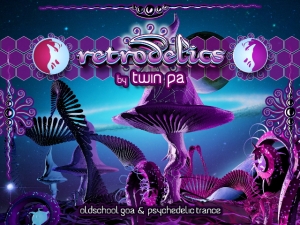 Twinpa officially joined the Goat Ranch as a resident DJ in 2014, though he’s been an enthusiastic supporter for some time.

Twinpa discovered Goa trance in 1998 and was absolutely impressed by its variation, complexity, and powerful sound. He then started collecting this music which was changing style nearly year-to-year. Later, Goa trance became psytrance, and the original Goa trance sound began to slide into obscurity. The current sound became more and more generic with lots of new labels cropping up, so Twinpa decided to create his own DJ sets with more variation and complexity; during this time he played tracks from Peak Records, TIP, and Alchemy Records.

Twinpa now specializes in playing sets using both old- and new-school Goa trance, and his sound can always considered massive, trippy, and dark. In 2012, when his twins were born, he called himself “Twinpa.” You can find his mixes here on the Ranch as well as around the web here: