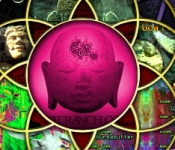 Welcome to the fourth edition of the Goat Ranch Monthly mix series! Broadcast on DI.fm’s Goa/Psy channel every 3rd Friday of the month, this edition aired on 20 December 2013.

Head Rancher Marsh brings forth a techy, trippy mix with a bit of a tongue-in-cheek side.

Notes from the DJ
This mix was built around three tracks that I’ve always wanted to get into a mix but until now have been unsuccessful: KV 23, Questionmark, and Lighthouse. These three tasty bites have for some reason fought me tooth-and-nail in previous attempts, but the stars finally aligned with this mix and they’ve allowed themselves to be presented here in all their tripitude.

Regarding the two unreleased tracks, From Here Remains Tomorrow by Space Age Genius and Wallpaper From Hell by Aussiedler: These were two of the many submissions made by members of the old international 604 email list way back in ’98/’99 when tracks were being assembled for the UO@604 compilation. While these two tracks didn’t make the cut for the CD back then, I was just thrilled to run across them while digging through some of my dusty archives. The Space Age Genius track is the early Suomisaundi style track with the super catchy (if maybe a little goofy) melody that comes in at 48:00, while the Aussiedler track is the crazy Aussie-style monster that rolls in at 75:00 or so. The “live” sounding aspect of the Aussiedler track is possibly what dropped it from the running for the final tracklist selection for the CD, but to me that’s what makes it so charmingly full-on. More on the UO@604 compilation can be found on Discogs: