DJ Solitare – The Future Was Now 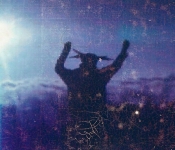 DJ Solitare bestows upon us a true gift of a guest mix here. In it we have nearly 3 1/2 hours of key-mixed magic from Mark Ainley, a man who’s been involved since the early days and has rubbed shoulders with many of the founding fathers of the genre. A label DJ for the fabulous DAT Records, Mark shares with us not only killer music presented in expert fashion, but a wonderful write-up as well.

“This mix is inspired by my experience at all-night events in Japan in the heyday of the psychedelic trance scene, primarily from 1994 to 1996.”

Description
The title is from a T-shirt produced by the psychedelic clothing label Hikari, the co-founder of which, David Dobson, was my mentor of sorts in the scene at the time.

My idea of set construction in general was formed through a number of DJs who I heard in my early days in the scene: Jay Mullen, aka DJ Spoo, whose Odyssey parties in Tokyo were the friendliest, wildest, most engaging parties of the time, and a 1994 mix tape of whose continues to be for me a model of flow and balance; Olli Wisdom, who I heard play all night twice (one of them a full moon party overlooking Mount Fuji) and whose palpable drive helped fund incredible enthusiasm wherever he played; Kuni of Tokyo Techno Tribe and Equinox, whose all-night Autumn Equinox 1995 set remains vivid in my memory; and Tsuyoshi, who I heard play multiple times both in Japan and in London, and who I was privileged to know and observe in the DJ booth at Return to the Source on many occasions.

I started playing off of DATs when I moved to London in 1996, as there was lots of unreleased music and CD burners had not yet been invented. My model of DAT mixing and doing quick slices or smooth overlays that were beat-matched even if they weren’t kick-matched came from hearing Kuni, Olli, Dan-Dan, and Joti. Kuni wasn’t afraid to let a track breathe; Olli was able to do quick slices and smooth drops; Dan-Dan was a master of creative mixing; and Joti demonstrated his mastery of intro-outro overlays at an all-night outdoor set he played in England in ’97.

As this retro set is a tribute to the music and vibe of the past, I have made mixes in the style they were done then (although I did not actually create this set with DATs) – and a number of musicians of the time have told me that the music was composed with this kind of mixing in mind. In some cases, the mixes are quicker and more evidently kick-matched, and in other cases there are longer lead-ins which are beat-matched but without overlaying the kick. (I think it’s time kick-matching and beat-matching became two separate terms.) Because I came to trance from a classical music background, mixing tracks according to key has always been important to me, as there is a jarring effect when the laws of harmonic blending are not observed. The shape of the storyline and connection of voices is what takes priority for me, and I would invite you to listen to some of the more synthesized sounds as voices and notice how they connect through from one track to the next.

As for the set itself: my intention here was to have an entire night set in microcosm, the sense of flow that a full night back in the mid-90s would take, but over the course of a few hours. This flow is particularly inspired by the outdoor party vibe, which is radically different from indoor events and would take the shifting shades of light into account, as well as where people were in their journey. The ambient intro leads into progressively more upbeat celebratory music before turning into the darkest section of the night; there is then a progression through twilight into the lightening day and then a celebratory mood for the sunrise and the start of a new day. Some of the longer mixes occur at key times as part of this story, most notably a very long transition around twilight time (around 430am) to allow a sense of wonder and magic to take hold. This would be very difficult to pull off in a club – but this music was not written for clubs, even if it is played there.

The photograph here was taken of me at sunrise at Return To The Source’s party at Mount Fuji in May 1997, as the sun was rising above the clouds located below us. The photo was taken using the first commercially available Casio digital camera which I had just purchased. I had a sticker made of the photo, which I attached to my book of DJ mix notes, and it is from this copy of the photo that I have scanned this image.

I will be posting a track listing with details about each track and some stories about them…at a later date. All of these tracks are released, and yet not all will have been many DJs’ first choice.

It is my hope that this mix will help you experience some of the magic that I experienced at these cosmic events.

This thing is a shiver-trigger, folks. Listen, enjoy, then come back later for the track listing! 🙂 [You can now find the full track list here.]